The All MMA Things Thread

by migya » Sun Jul 25, 2010 1:38 am
Reply with quote
Finally watched UFC 113 and 114. Machida did get spanked, what a clown. Koscheck taught Daley a lesson and does deserve the title shot against GSP, though he'll get spanked some what. Rampage got beaten pretty convincingly by Rashad Evans,just way toofast was Evans. Diego Sanchez getting beaten was something to see as well and by a relative unknown also.

by migya » Mon Aug 09, 2010 1:11 am
Reply with quote
UFC 117 just went by and though I haven't seen it, I saw the fight by fight call and Anderson Silva was set to lose his middleweight title after Chael Sonnen beat him the first four rounds, but Silva submitted him with a trianlge choke and escaped still the champion. What a showing by Sonnen, who talked alot of trash about ASilva leading up to this fight for months. He backed it up with the best performance by anyone against ASilva and had the title won until the end.

Fitch beat Alves in their rematch from a few years ago. He did it with his usual wrestling and ground and pound, staying away from Alves' great striking. It has been said that Fitch will now be the next in line for a Welterweight title shot, but he has said he won't fight his team mate Koscheck if Koscheck beats St. Pierre

Either Oracle of HP Arena in San Jose?

by Beast Mode » Mon Aug 09, 2010 2:14 pm
Reply with quote
Oracle Arena. Was the best UFC I've seen in a LONGGG time. Best card they've ever had top to bottom by FAR. Every fight had great moment(s) as well. All for free, too

Sent from my PC36100 using Tapatalk

by migya » Sat Dec 11, 2010 6:03 am
Reply with quote
GSP should win again. I hope he moves up to go against Anderson Silva at Middleweight and ASilva moves up to go for the Light Heavyweight title

Fight would be crazy though.

Fight would be crazy though.


Noone destroys GSP. GSP walks around at about 185-190 pounds, so he is in that weight range.

GSP smashed Koscheck, as I expected. He really looks unmatched as ever at that weight division

by JREED » Mon Dec 13, 2010 3:29 pm
Reply with quote
Yup GSP was superior in virtually every aspect of the fight, the guy is just a machine. Three scorecards of 50-45 is pretty much domination... 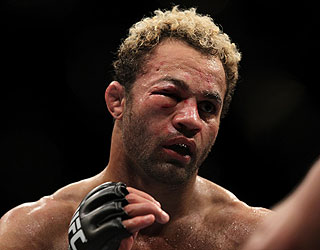 by migya » Sat Jan 08, 2011 8:20 pm
Reply with quote
Saw UFC 125 a few days ago and the fight between Edgar and Maynard was pretty good. Edgar showed great toughness after getting smashed in the first round and then coming back to almost beat Maynard. Apparently they are having a rematch very soon

eh never really thought of him as arrogant. maybe in his younger days but UFC needed that, it's part of what expanded the brand. he's a pretty well respected dude.

eh never really thought of him as arrogant. maybe in his younger days but UFC needed that, it's part of what expanded the brand. he's a pretty well respected dude.


Haven't seen that oneyet, but Rashad beat him this time and will go against former teammate and now champion Jon Jones